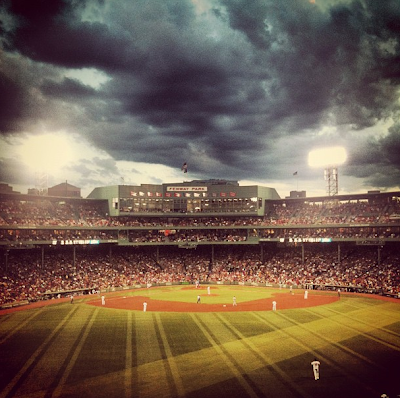 In a year like this one, it’s hard to be a Boston sports fan. In football, the Patriots severely disappointed in their Super Bowl loss. In basketball, the Celtics recovered a mediocre season, only to lose in the NBA Eastern Conference Finals to the Miami Heat. Then, to top off that loss, Ray Allen opted to go to Miami last week as a free agent. Now, with the baseball season half-way through, the Red Sox find themselves at the bottom of the American League East. It’s been a steep descent since January!

Yet Christian faith is much like being a sports fan. On a demographic level, it is quite similar. There are plenty of fans who are pretty nominal. (Truth be told, I often don’t pay much attention to the baseball season until after the All-Star break.) There are also plenty of rude fans – ones that embarrass everyone else. At a deeper level, there’s a trust that looks a lot like faith. To be fan means believing that sticking with the team will pay off. There’s an inherent shame attached to being a “fair weather fan;” while continuing as a fan, even when your team isn’t successful, is a virtue – just ask a Chicago Cubs fan!

Also, sports seasons mirror the realities of life. There are surprisingly fruitful and encouraging times in life, and there are discouraging times. Some of those periods are lengthy droughts. Moreover, the circumstances of life make achievement and recognition easier for some than for others. (…Like the Yankees!)

Christian faith similarly is not a trust that is blown around by the winds of fortune. Rather, it perseveres even in difficult times because it has seen the deposit of its future glory. As the author of Hebrews makes clear: “Now faith is the assurance of things hoped for, the conviction of things not seen” (Heb 11:1). That faith, as explained in the previous chapter, isn’t blind faith; but it is rooted in the known work of Christ. And it looks forward to the consummation of his work that sweeps us into its wake, and brings us all the way into the presence of God – “a city … whose designer and builder is God” (11:10), “a better country” (11:16), “the city of the living God” (12:22), “to God, … and to the spirits of the righteous made perfect, and to Jesus” (12:23-24). It is not always easy to hope. Some seasons of life – like some baseball seasons – are hard than others. Some lives receive more obvious tastes of glory than others. But it is that colossal hope – made certain by Christ – that maintains all Christian faith. I want to see that glory. Here’s hoping for the faith to persevere!